An MSN student from Santa Fe will graduate from ENMU this weekend.

Portales, NM (12/08/2021) — Duwane Goodwin is graduating from Eastern New Mexico University this weekend with a master's degree in nursing education.

Goodwin has three associate degrees from the Community College of the Air Force, an associate in nursing from Carrington College and a Bachelor of Science in Nursing from ENMU.

He works as a clinical educator at La Familia Medical Center in Santa Fe, New Mexico. He shares, "It's an incredible position in an organization with such an incredible mission that serves the community with quality healthcare. As their clinical educator, I facilitate staff development and provide education and training for about twenty medical staff."

He adds, "Of course, my education from ENMU has been instrumental in my success at La Familia."

Goodwin chose to return to Eastern for his master's degree because he had an "incredible experience at ENMU while working on my bachelor's degree, and I'm very proud to be a Greyhound. I appreciate that ENMU's nursing program is accredited through the Accreditation Commission for Education in Nursing. There's no other place I would have rather continued my education than at ENMU."

The nurse of 11 years picked nursing as his field of study because he has "always had a passion for education and training. I chose to pursue a graduate degree in nursing education to support my career goal of instructing in a pre-licensure nursing program."

He took most of his courses at ENMU online except for portions of his clinical capstone. His favorite class was EDF 503 Educational Psychology. He explains, "It was by far the most intensive course I have taken and one of the most interesting. It was so very interesting to discover how people learn and how their life experiences can impact their learning."

Goodwin shares that were three professors who "really had an impact on me during my graduate studies. Dr. Michael Shaughnessy pushed me to think deeper and look for more meaning as we explored educational psychology. Dr. Susan Bassett was compassionate and dared to guide me toward understanding instead of simply pointing out my shortcomings. Finally, Dr. Kristin Kuhlmann pushed me to do my best work and, in turn, pushed me to be my best person."

He advises students interested in pursuing an MSN to "go for it. Get off the fence and just go for it."

Goodwin grew up in Texas and traveled for decades in the military. He is a retired combat veteran of 20 years, where he served as a pararescueman in a combat search and rescue unit. During his tenure, he was awarded the Distinguished Flying Cross with Valor, the Air Medal, the Air Force Combat Action Medal and Aerial Achievement medals. He also served for four years as a formal military instructor for the Community College of the Air Force.

He received his associate degree in nursing between military assignments. While he was in nursing school, he worked as a paramedic for the rapid response team at the University of New Mexico Hospital and as a firefighter for the city of Rio Rancho, New Mexico.

Immediately after nursing school, he worked in the emergency department at the Albuquerque Veterans Medical Center and soon enrolled at Eastern to pursue his bachelor's degree in nursing.

In his free time, Goodwin and his girlfriend tend to their backyard chickens. "We are finally getting a return on our hard work," he says, adding, "By the way, chickens are great therapists."

Goodwin's son is attending Baylor University, where he is studying engineering. "Baylor is in Waco where I grew up, so it's nice that he is only a day trip away," says Goodwin. 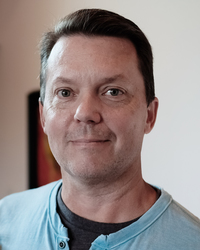